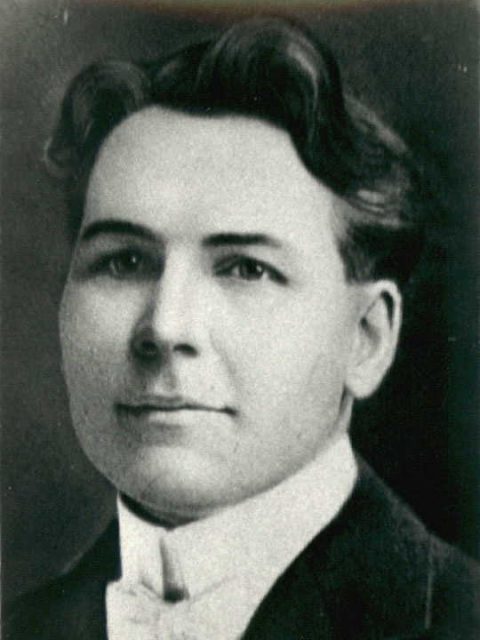 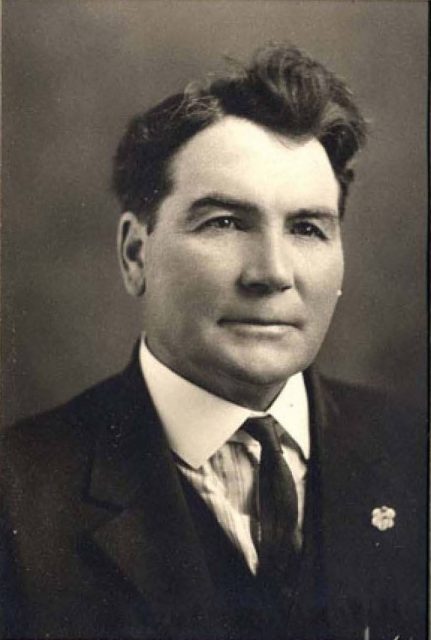 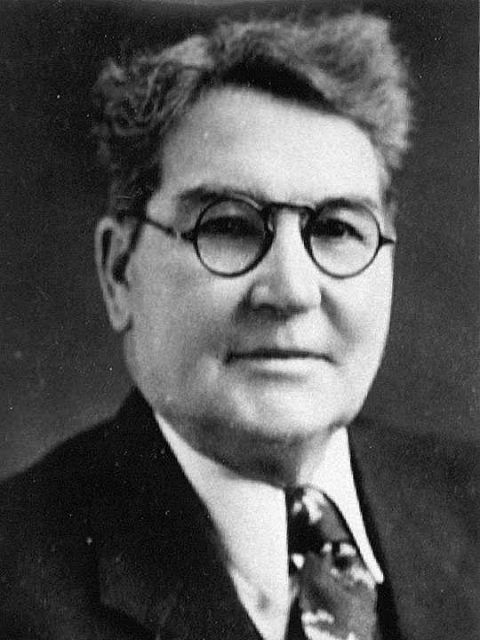 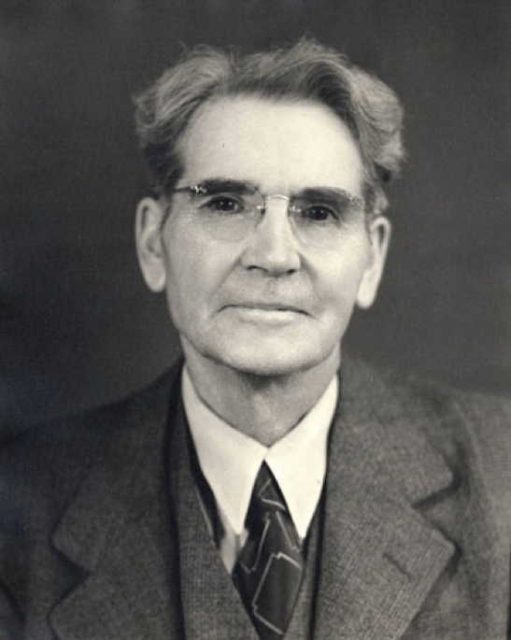 Arta McLain Seely, 1944 or 1945. Perhaps for an obituary or other newspaper write-up? This professional 8×10 resides in a manila envelope with penciled notations: “A. M. Seely #1584 Pd 1-8×10, Salt Lake Tribune, Dorothy Helberg, 4th East 382.” I obtained this photo from his niece/stepdaughter, Marion Neff Anderson. I’ve shown it to others who knew him and who doubted that this was indeed he, but it is. Stomach cancer did fearful things to our Grandpa, and I honor Aunt Vera (Knapton Wilson Neff Seely Sheffield) for taking care of him in his last sickness. (Description by Richard Anderson)

Photograph of South Main Street in Brigham City, circa 1900 (Alma Walter Compton, photographer, 1856-1931.) The Brigham City Tabernacle is on the left. The Central school is on the right. This is the 2-story school that Boyd K. Packer attended. Larry Richman attended the Central School in a 1-story building that was built later on that block. This is the block where the temple stands today.

Arta McLain was born in Brigham City, then moved to East Mill Creek in Salt Lake. At the age of 7, he found a dark crystal stone, which proved to be a seer stone to him for 5 years, allowing him to find lost articles and see relatives in other cities. At age 22, he went on a mission to Alabama. He contracted malaria and had to return home after a year. (Read more about Arta McLain’s seer stone.) 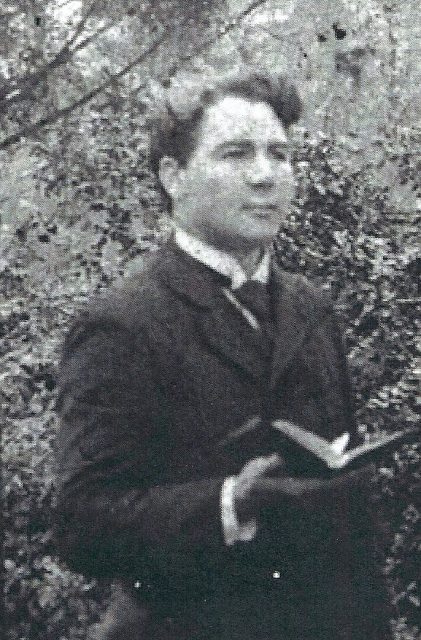 Arta McLain Seely as a young missionary in Alabama, a year or so before he married Alfaretta Neff 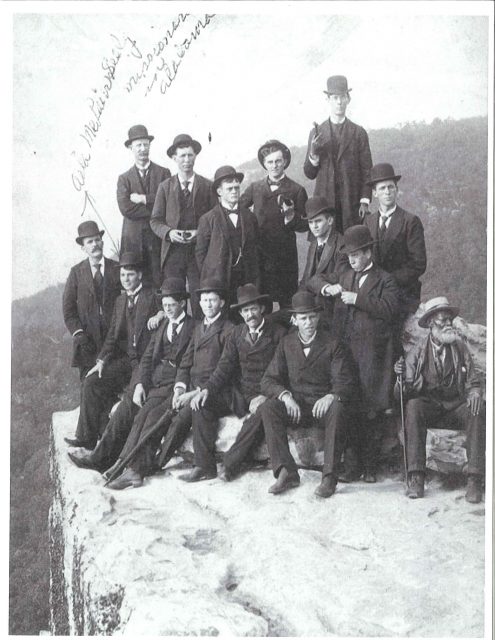 Arta McLain Seely as a missionary in Alabama

He married Alfaretta Neff in 1899 and in 1912 bought a ranch in Rosette, in Park Valley in western Box Elder County, where he served as bishop. Once a young boy was run over by a wagon, crushing his skull. Arta McLain reshaped the boy’s head with his hands back into a normal state and blessed him that he would live. The boy grew to be a man with no mental or facial impairment, except for the impression of Bishop Seely’s fingers and thumb on the side of his head. He moved to Brigham City in 1928. His wife Alfaretta Neff died in 1943. Arta McLain remarried later that year to Vera Knapton. He was a postal clerk and delivered mail to a section of town. He died in 1945.

Connection to Brigham Young: Arta McLain’s father was Isaac Joseph Seely (read his life sketch), son of William Seely and Lucy Ann Decker. When William and Lucy heard the gospel message, Lucy accepted it, but William did not. They later separated. However, it appears that at some point, William did accept the gospel. Note these two evidences:

On June 15, 1842, Lucy was remarried and sealed to Brigham Young as his first plural wife by the Prophet Joseph Smith in the Nauvoo Temple. Isaac and his sister were also sealed to Brigham Young. Isaac lived in Nauvoo and he and his only sister, Harriet, crossed the plains to Salt Lake City with their mother Lucy in 1848. Isaac lived with his mother and step-father, President Brigham Young, from the age of five years to manhood. Isaac served as one of Brigham Young’s bodyguards. Read a short life sketch of Brigham Young, which lists his wives and also gives the order of the first ten plural marriages in the Church. Read other life sketches of Isaac Joseph Seely on FamilySearch.org. According to the family story, Isaac disliked the pervasive orderliness of Brigham Young’s home, the Beehive House, which his mother managed for its first 25 years, and ran away to California at age 16. He next appeared in Salt Lake five years later, with a string of wrestling medals, whereupon Brigham is said to have clapped him on the back and hired him as a bodyguard. He married Elizabeth Jane Fisher, of the East Mill Creek Fishers; they had eight children, of whom the sixth was Arta McLain Seely. 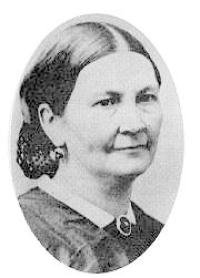 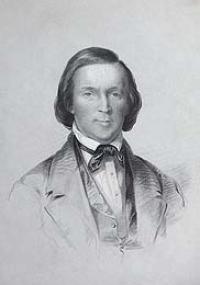 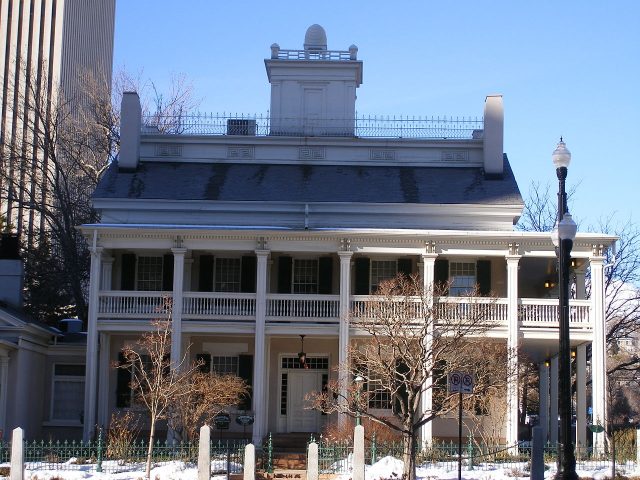 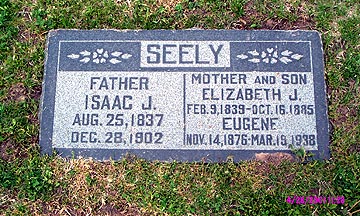 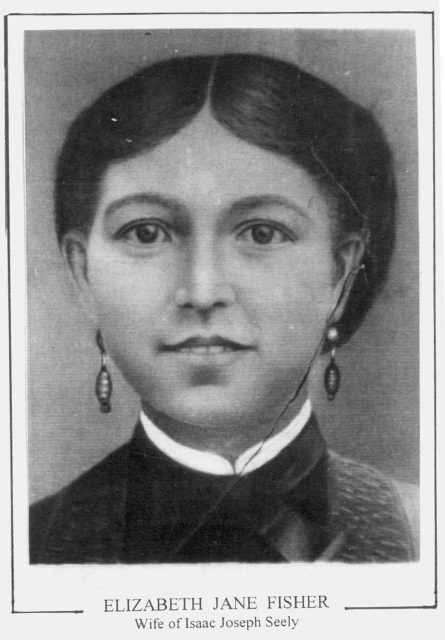 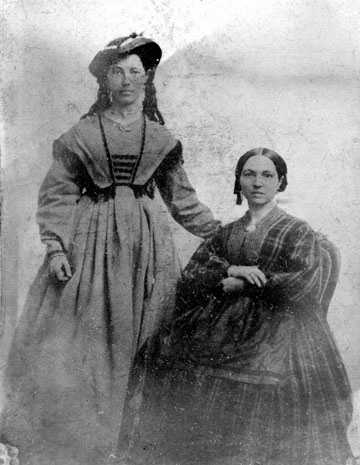 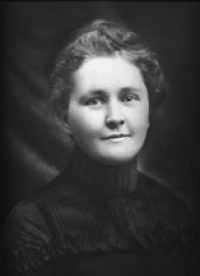 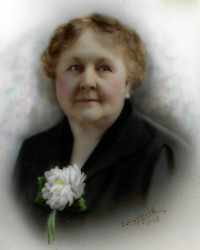 Read a life sketch of Alfaretta Neff. Download a transcript of the funeral services for Alfaretta Neff, transcribed by R. Kent Seely. Attached are the correctly-quoted poems from the funeral. Listen to an audio recording of members of the Seely family as they reminisce about Seely and Neff ancestors. This recording was made Nov 22, 1986. Participants: Kent & Mary Seely, Jim Seely, Margaret (Grant Seely’s wife), and Verna May Seely Carter. Alfaretta’s parents were Franklin Neff (1824-1882; see his life sketch and another life sketch) and Frances Maria Stillman (see the life sketch of Frances Maria’s mother Harriet Elizabeth Seymour). 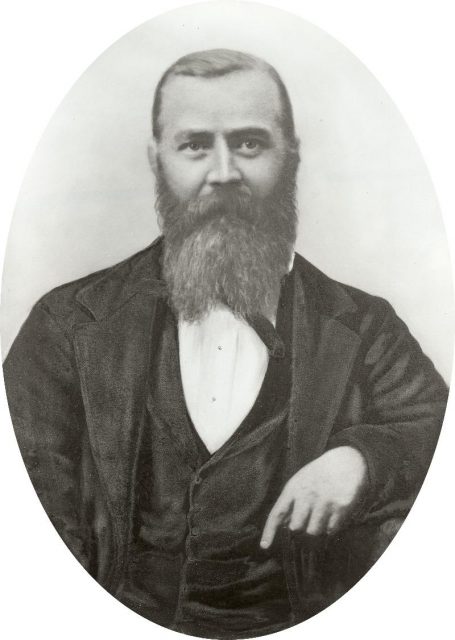 Franklin’s parents were John Neff (see his history and another history) and Mary Barr (see her life sketch). See Neff photos. See a list of the descendants of John Neff and Mary Barr. John Neff was a successful businessman, running his father’s woolen factory, and then later a distillery and had extensive land and livestock interests. At one time, his holdings amounted to half a million dollars. In politics, he was a whip and was intimately acquainted with President Buchanan, Theddeus Stevens, and other leading politicians of that time. He was a Mennonite. John and Mary were converted to the Church in 1844 while living in Strasburg, Pennsylvania. In 1844, John, Mary, and their daughter Barbara visited the Prophet Joseph Smith at the Mansion House in Nauvoo and Joseph told them that he didn’t expect to live long. He was martyred six weeks later. John sold his property at a great sacrifice and moved to Nauvoo. In Nauvoo, Franklin married Elizabeth Musser in 1846. They headed west with the Mormon pioneers and when they arrived at Winter Quarters, Brigham Young asked for a flour mill to be built. The Neffs contributed $2,600 of the $3,600 needed for the mill and Franklin stayed behind to run the mill. In 1848, they moved west to Mill Creek. 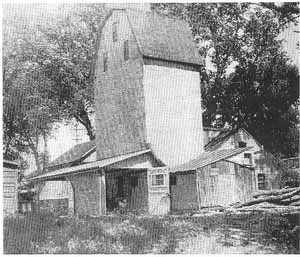 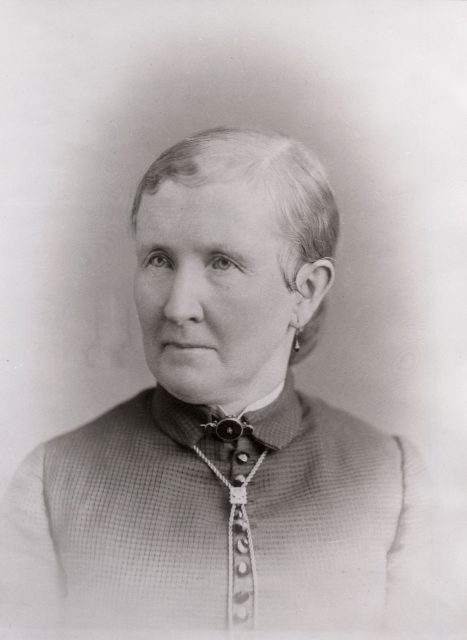 Summary from a life sketch of Frances Maria Stillman: She was born in New York in 1830 to Jason Stillman and Harriet Elizabeth Seymour. Her father was sick with consumption (tuberculosis), so Frances Maria had to work extra hard to keep the family going. Their family joined the Church and moved to Nauvoo. On January 20, 1846 (at age 16), she was sealed to Samuel Russell in Nauvoo by H. C. Kimball. Ester Hill and Abigail Horn were also sealed to Samuel Russell at the same time as Francis Maria. However, this sealing was cancelled later and Frances Maria was sealed to Franklin Neff. In 1850 (at age 19), she was sealed to Samuel’s brother Lester Russell and they set out with the Saints to journey across the plains. Lester died that same year crossing the plains with the Aaron Johnson Company. After Francis Maria arrived in East Mill Creek, she married the other brother Isaac. [There is some question about the names of these Russell brothers she married. They were named Samuel, Lester, and Isaac Nelson Russell. There is no clear indication which two or three she married.] In 1855, she married Franklin Neff and they later gave birth to Alfaretta. Upon arriving in Utah, Brigham Young asked the Neffs to build a flour mill. Franklin operated the mill with his father and later inherited it. Franklin also started a saw mill, a shingle mill, and a molasses mill. He also owned a great deal of land (from 20th East to the foothills and from 33rd to about 40th South, about 1,400 acres), which he deeded to the Church when the Saints were asked to live the United Order. Franklin gave free flour to the Indians. At the request of Brigham Young, he went with Porter Rockwell (his brother-in-law) among the Indian tribes to try to build more friendly relations between the Indians and the whites. Franklin named his last daughter Alfaretta, a “pretty Indian name,” even though she had blue eyes and red hair. Her mother always called her Alfie. Francis Maria was also a school teacher and a practical nurse. 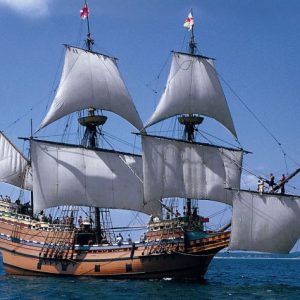 Our Mayflower heritage comes from four passengers: Thomas Rogers and his son Joseph and Stephen Hopkins and his daughter Constance. Their names appear in red text at the top of the chart below. Thomas Rogers’ wife Alice stayed in England because they could only afford to send two family members. They had to sell their house to do that. Joseph’s three teenage siblings stayed behind with their mother, where Alice died without ever seeing the New World. Stephen Hopkins’ wife Mary (from whom we descend) died before the Mayflower sailed. 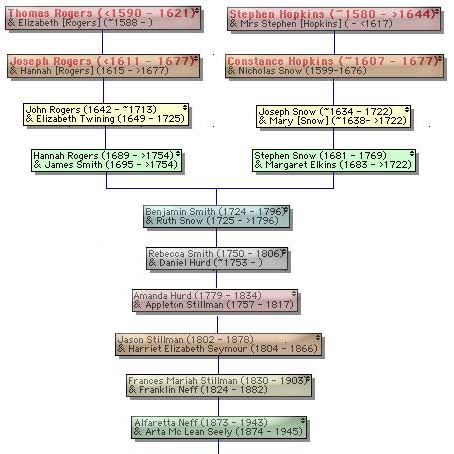 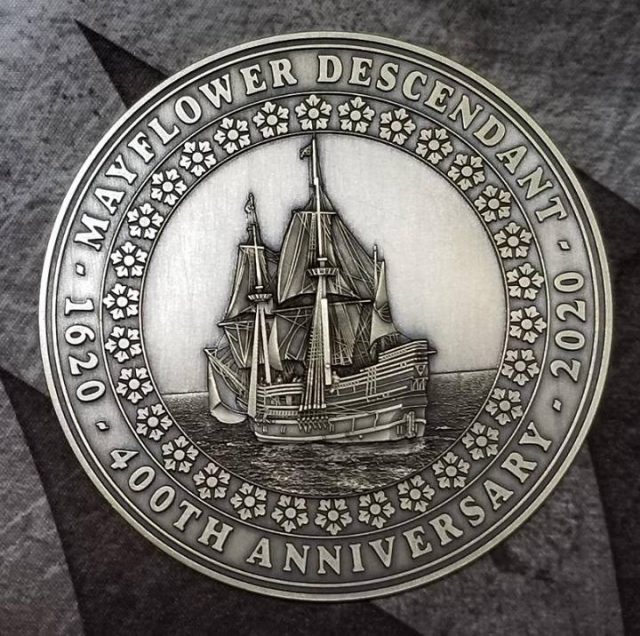 The Society of Mayflower Descendants has issued this commemorative insignia to celebrate 2020 as the Quadricentennial—400 years since our Pilgrim ancestors arrived in Plymouth and set the pattern for self-government in the New World. This marker will be placed on the gravestones of descendants.

The full lineage from the Mayflower to Larry Richman is as follows: 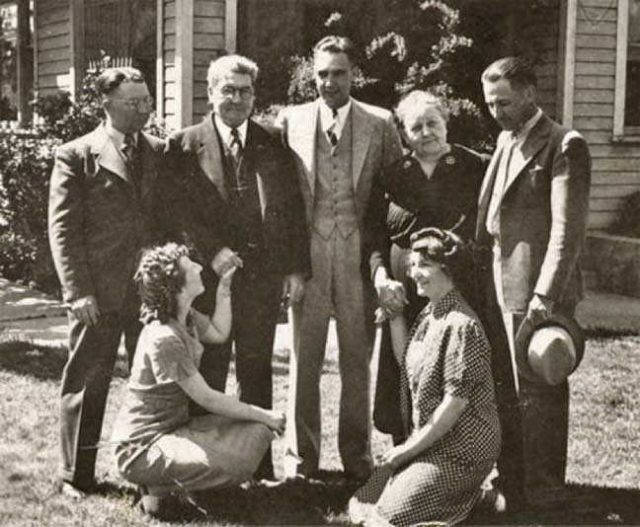 The Mad Seelys at Home (about 1935). We find Leola and Verna front and center in this exceedingly precious photo of the Five Mad Seelys and their parents, dating from the late 1930s or very early 1940s (Grandma died in 1943; Grandpa, in 1945). Behind the sisters stand Jim (F Leland), A. M., Grant, Alfaretta, and Elwyn. The scene, by the way, is the front yard of the Seely homestead in Brigham City. Over Uncle Grant’s head, almost obscured by his distinctive altitude, you can just make out the front door. If the porch swing is still there, it’s out of sight. (Description by Richard Anderson)

Picture of Arta McLain Seely & Alfaretta Neff, gathered with their descendants in their Brigham City living room, Christmas 1941. See an annotated picture with names, and another. More info web page and screen capture. 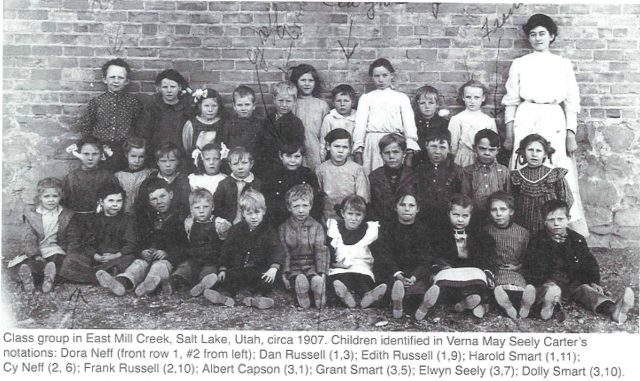 Arta Elwyn Seely in a school photo about 1907 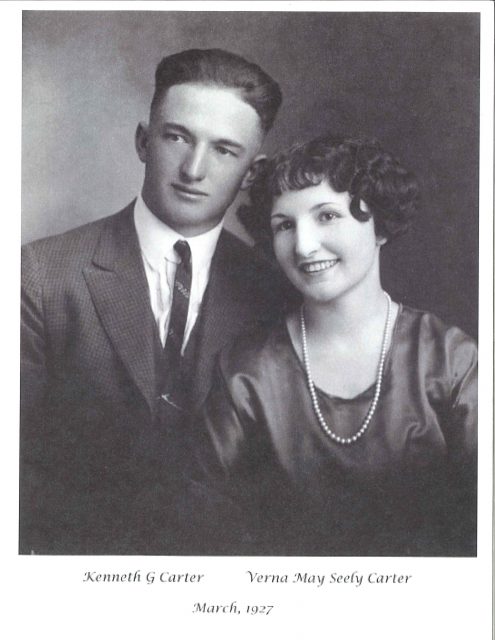 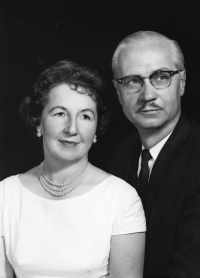